Over the past five month's Restaurant Eugene and Holeman and Finch Public House's Chef Linton Hopkins has been targeted for harassment and protest by the Animal Protection and Rescue League because of our choice to include foie gras on our menus.  The first complaint from Rebecca Weston came in March and stated that if we did not immediately remove foie gras from our menu we would be subject to protest, but that if we did remove it, positive reviews of our restaurant would be posted on Yelp.  This felt a little coercive, but nonetheless, prompted us to do some soul searching.  Sourcing and ingredients are very serious matters here.  Chef Hopkins is steadfastly opposed to the industrialized farming of animals, as well as vegetables for that matter.

We had multiple conversations with our foie gras farmer, Guillermo Gonzalez, to be sure we felt comfortable with his animal husbandry and other practices.  Chef revisited his culinary school field trip to Hudson Valley Foie Gras.  We conducted thorough research into the issue, invited our guests and staff to give their input, read the book The Foie Gras Wars, and reached out to our chef and restaurant friends to see how they felt about foie gras and the APRL accusations that it is inhumane.  We reviewed the APRL literature, including their video.  We spoke to experts around the country about foie gras, and the APRL.


Here is some of the information we received from Guillermo:

A Day in the Life
Sonoma-Artisan Foie Gras is committed to the highest standards of animal welfare, and utilizes humane techniques in the raising and feeding of ducks. Ducks are never individually caged and are allowed to roam free range.
The ducklings are received when they are one day old. They spend the first 5 - 8 weeks in a barn, under heat lamps and on bedding of wood shavings while they develop their feathers. They walk about, flap their wings freely, and have access to all natural feed and water. Once they have enough feathering, they are brought out to the walnut orchards, where they continue to roam free range for about two months. Here again, they have access to all natural feed (no hormones or antibiotics), water and shade.
During the final two weeks, they are housed in temperature-controlled barns, where they are kept in groups of about 12 ducks per pen measuring about 33 square feet. They are fed twice per day by the same feeder, using a pre-measured quantity of feed.
Natural Capacity
The first evidence of foie gras is found in ancient Egyptian history, some 45 centuries ago. In the wild, ducks and geese gorge themselves prior to migration in order to temporarily store fat in their liver and skin, which they use for energy during migration. The managed feeding in foie gras production utilizes the duck’s physiological capacity to transform the excess feed into fat and store it in the liver and skin.
Each feeding takes only a few seconds and the pressure applied has been studied to be non-injurious to the duck. A funnel is inserted down the duck’s esophagus, which deposits food as it is drawn out of the esophagus. Ducks do not have a gag reflex, throat or stomach, and the esophagus serves as a holding area for the feed while it is digested. The duck’s esophagus, as with any waterfowl such as the blue heron, which is able to swallow large, live fish, is expandable and pliable. For these reasons, the feeding is not harmful to the animal, as proven by scientific studies. Since the process of producing foie gras is physiological rather than pathological, the fattened liver, or foie gras, created by managed feeding, would return to its normal size if the process stopped.
Here is a letter Guillermo's veterinarian wrote to the US Senate.
Here are some photos of the Sonoma-Artisan Foie Gras Geese. 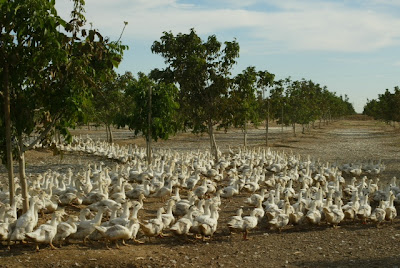 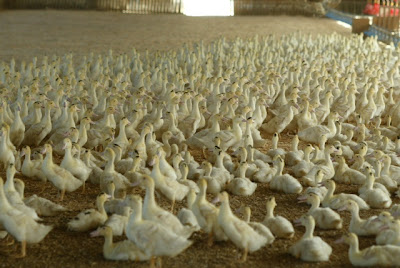 After all this soul searching, we decided that we felt ok about farmer Guillermo Gonzalez and his Sonoma-Artisan Foie Gras, and we wanted to dialog with the APRL to explain our position.  We scheduled a meeting with some APRL representatives in Atlanta, including Rebecca Weston.  Several people attended.  Chef Hopkins had ordered a copy of Dan Imhoff's coffee table book on CAFO's (a book we give to all of our young cooks) for each person and explained that he too felt strongly about animal welfare and good animal husbandry, and that as a result he refused to purchase any meat that was raised inhumanely, and that from his perspective the real battle was against industrial farms.  Chef Hopkins's explained the painstaking level of attention to detail that goes into all the sourcing at Restaurant Eugene and Holeman and Finch Public House.  He pointed out that many of the photos in the APRL literature also appear in the CAFO book and are attributed to industrial foie gras farms in Israel and France.  He also verified that each of the APRL representatives at the table was a vegan who didn't believe in eating meat of any sort.  Our hope was to excite this group into real action on a real issue.  We invited them to be a part of summit on good meat and share their perspectives with a wider audience.  We felt the meeting went well and our mutual points of sympathy were understood.

Unfortunately, this group would not be reasoned with and has taken a bafflingly myopic view of animal welfare.  When we reached out to them to discuss plans for the good meat summit, they questioned whether or not we were still serving foie gras.  Soon after, they showed up at Restaurant Eugene and Holeman & Finch Public House to protest foie gras.  Their posters and placards had the same photos of the Israeli and French industrial farms that appeared in the CAFO book.  They also had signs that read "Linton Hopkins is a hypocrite," "Restaurant Eugene is not green," and "Honk if you love animals."

In the end, it is a personal decision for everyone whether they choose to eat foie gras, oysters, bacon, broccoli, cheese, or peaches.  We are here to give you that choice every night, and to instill in you the confidence that we wouldn't serve it if we didn't believe in it.  We care deeply. We try hard, and we are always examining our practices in order to improve them.  We thank our friends and guests for their patronage and support, and we thank Rebecca Weston and the APRL for the opportunity to have a public discourse on foie gras.  We won't be bullied into making the choice someone else wants us to make, but we will always do our best to make careful, informed decisions.


Here is our public statement about the issue.
·       Everyone at Restaurant Eugene and Holeman & Finch Public House cares deeply about all of the food we serve at our restaurants, especially the quality of life and welfare of the animals which provide the meat for our menus.  We are vehemently opposed to concentrated animal feeding operations and only buy from farmers whose animal husbandry practices and ethics we know to be of the highest quality.
·       We recognize that an animal sacrifices its life in order for us to eat it, which is why our kitchens are dedicated to using every possible part of the animal so that nothing goes to waste.  In fact, at the Public House, an entire section of our menu is dedicated to “parts,” because we believe that the needless waste of animal life is profane.
·       We also recognize that eating meat is a choice that not everyone makes, which is why we devote entire sections of our menus to vegetables.
·       We believe in the rights of animals to have a healthy and humane life and death.
·       We also believe in the rights of people to choose to eat what they want.
·       We will not be bullied or coerced into making menu choices based on anyone’s extremist beliefs.
·       Producing foie gras is legal and based on a 5000 year old tradition.
·       We have confidence in the practices of the American foie gras producers from whom we purchase our foie gras, namely Sonoma Artisan Foie Gras.
·       We have met with the APRL and believe that they are misinformed about foie gras production in the United States.

Thank you for reading this.  We hope to see you for dinner soon.
Posted by Restaurant Eugene at 5:36 PM 27 comments:

A few years ago, Chef Hopkins considered the "Tower of Crab" to be one of his signature dishes.   Guests raved about it, and we toy with the idea of bringing it back every now and then.   Whether or not in tower formation, you can bet that when the season is right and the fishmongers can deliver incredibly fresh soft shell crab, it will on our menu.  We thought guests might like to know a bit more about what a soft shell crab actually is...seriously, haven’t you ever wondered why their shells are soft?
Actually, the term “soft-shell” refers to crabs that have recently molted their exoskeleton, and are therefore still soft. Most soft-shell crabs in the US are of the blue crab species and at their freshest from April to September. Folklore, says that the soft-shell crab season begins with the first full moon in May, which is when the blue crab fattens up and begins molting to accommodate its summer growth. This is how soft-shell crabs have become so closely associated with summer: it's the season in which they are the freshest and the largest. The extra fat makes soft-shell crabs particularly flavorful.
The actual shedding of the shell can take anywhere from one to three hours. Once the shell is shed completely the crab must immediately be removed from the water or else its new shell will begin to harden again due to chemical reactions with the sea water.  Virginia and Maryland crabbers have a trick to telling when these crabs are about to molt: a pink dot, which is the new shell just barely peeking through the old one, appears on the crab’s back fin about one week before they “bust,” or shed.  There are five different sizes of soft-shell crab, determined by the width of their shell. They are whales, jumbo, primes, hotels and mediums.
The blue crab’s scientific name, Callinectes sapidus, means beautiful savory swimming.  We agree.  They are beautiful, and are known to have be sweet and tender, yet with a mildly tangy flavor.  We have just received a delightful shipment of jumbo soft-shell crabs from the Chesapeake Bay area, which will be fried in cornmeal and served with a cold cucumber cream soup poured tableside.
Come enjoy a dressed-up summertime favorite.
Posted by Restaurant Eugene at 3:04 PM 1 comment: