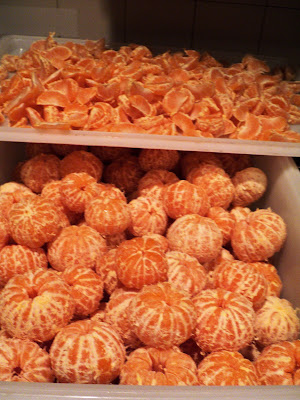 In the winter months, we give thanks for citrus.  We like to think that the fabled "Orange Blossom Special" isn't just a passenger train delivering sun-sick snowbirds to Florida, but also the freight train that brings fruit starved citizens of northern climes a little taste of the tropics (or at least the sub-tropics).  So, in winter, we also give thanks for our Floridian neighbors to the south and their latest delivery of vitamin C infused deliciousness: Satsumas.

The Satsuma mandarin is many things:  an oblate spheroid (flat & round, as opposed to prolate, like an egg); an easy-to-peel, sweet, seedless variety of orange; a cold-tolerant citrus crop important to growers in Florida, Alabama, Louisiana and Texas (in each of which state, incidentally, you'll find the  homonymous town).   In the late 19th century the Satsuma was first brought to Florida from Japan where it had been cultivated for some half a millennium.  It is in season now throughout the sub-tropics, which is probably why it's a customary gift for the lunar (aka Chinese) new year, thought to symbolize abundance and good fortune.  We are so grateful for the good fortune of having them in abundance right now, and as per usual, we're putting some up for that inevitable day, when Satsumas are no longer abundant and we find ourselves craving one last sweet, aromatic, sunshiney bite with some shrimp or lettuces.  Look for the beautiful golden jars at the top of the bar while they last. 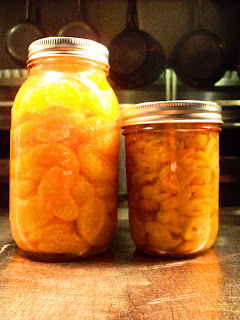 Posted by Restaurant Eugene at 12:54 PM No comments: